New York's only homegrown horror hosts, Vlad Tsepis & Creighton, are in Ghoul A-Go-Go. Described as a black & white children's dance party hosted by monsters, it plays like a cross between Zacherley's Disc-O-Teen and a spook show. They have little kids in studio spinning The Wheel of Dance to see what type of dancing they will be doing while listening to hopping music and live bands. Each episode has a theme, like spiders, robots, & mummys. Throughout the episode they show trailers, music videos, & newsreels based on the theme.
Vlad runs the proceedings, while Creighton takes care of crowd control and shows films.

The show is sponsored by Hickelberry's, a purveyor of meat products, like Hickelberry's Meat Shakes. YUM! Occasionally, Vlad & Creighton help acquire some of their stock for them. 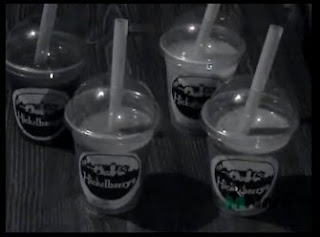 Here is a little taste of the show: