Monster Creature Feature stars Ormon Grimsby, the undead undertaker. He's based in North Carolina and does a classic type of horror host show in black & white. The style of the show is in the same vein as Zacherley and could be his modern day equivalent. His sometimes sidekick, Dead Lou, is immobile but loads of fun. Ormon also hosts a radio show on Cult Radio A-Go-Go: http://www.cultradioagogo.com/ 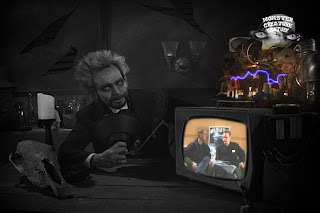 The hour long show is a mix of interviews, trailers, on location reports of various events, and half of a movie. He follows it up the next week with more of the same and the other half of the movie.

Here is part of one of his shows:


Check him out at: http://www.mcftv.com/