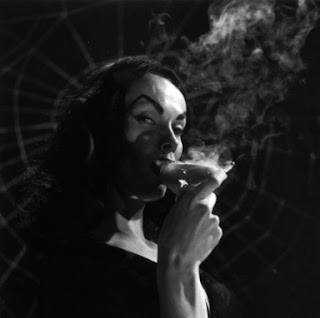 Vampira is the queen of horror hosts. Predating Zacherley, she hosted horror movies with a sensuality and dark humor that was shocking for the time. Know for her incredibly small waist and sense of the macabre, she had a big following during the show's run. Although her show didn't last that long, she is well remembered. Her fame was brought about by many modeling assignments in the Vampira guise. Although having similar careers on opposite coasts of the United States, Vampira and Zacherley never met in person, though they are linked in many people's minds. 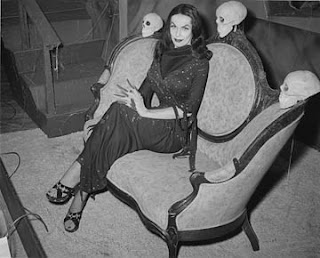 Another important reason for her fame and infamy was her appearance as a ghoul in Edward D. Wood's notoriously bad movie Plan 9 from Outer Space. She was cast as a silent zombie and did not utter a single line, a major contrast to her sharp tongued puns she was known for on TV. 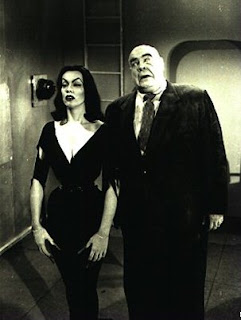 Although it was thought that Plan 9 was all the world could see of Vampira, in the 1990s a promotional reel was found at Vampria's old TV station and included in it was a few minutes of her show, including the entire opening, as seen below:


In 2006, director Kevin Sean Michaels made a feature length documentary about Vampira and her alter ego Maila Nurmi. Vampira the Movie discussed Maila's life and her creation of Vampira, including interviews with fans, contemporaries, and horror hosts that were inspired by her. For more information see: http://vampirathemovie.com/ 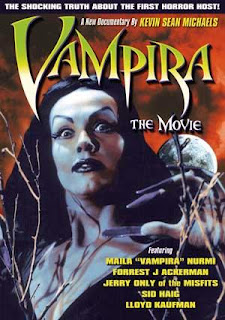 Unfortunately, on January 10, 2008 Maila passed away. Even gone from her earthly existence, her presence will always be felt by anyone who puts on a long black dress, a black wig, and gets ready to pick up a bubbling glass of poison. 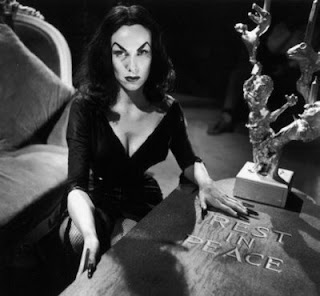 To learn more about Vampira and pick up her only existing show on DVD visit: http://www.vampirasattic.com/
Vampira