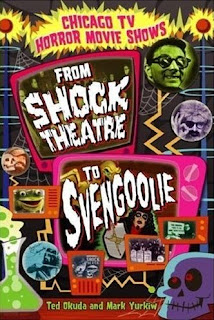 The book Chicago TV Horror Movie Shows: From Shock Theatre to Svengoolie by Ted Okuda And Mark Yurkiw is an examination of almost all the TV shows that regularly scheduled horror and science fiction movies in Chicago.

There are chapters dedicated to the horror hosts of the area, such as Marvin, Svengoolie, Son of Svengoolie, and The Ghoul. Also featured are the shows without hosts, like Creature Features, Monster Rally, and Thrillerama. Most get their own section of the book where the dates the shows ran, reminisces of them, and interviews with people who were involved with them, both behind the scenes and in front of the camera. Spread throughout the book are many pictures and vintage ads from the shows, as well as movie posters of films that they ran.

Other chapters in the book cover the authors' top 100 monster movies, reviews of 8mm versions of some of the movies, and a guide to the "Shock!" and "Son of Shock" film packages that were shown in the 1950's.

The book is a great reference for anyone who lived during that era in Chicago, but others will find a familiar common ground for what was happening in their local area. All the information that is given on the shows makes it useful for someone looking for the history of these hosts and the programs, but what comes across most in the writing is the authors' personal attachment to these shows and the movies. They lovingly recall the feelings they and others had watching them and make it obvious the influence these shows had on their lives.