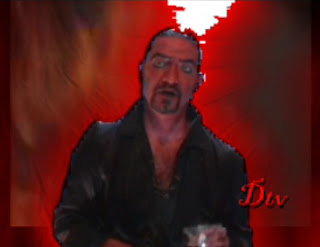 Fright Time FunHouse presented a Christmas special this year, but it isn't hosted by Jebediah Buzzard. He brought in a guest host for this episode.

Here's Jeb's description of the special:

"As you may know, I don't do the Xmas specials. Instead Big "D" himself pops in for his yearly visit do host some type of seasonally themed movie. This year's special is "Maciste in Hell", a 1920's French silent film about the perils of selling ones soul. The soundtrack has been stripped and replaced by the brillaint hillbilly goth stylings of my friend Rodger Chennault, known for his band "Hillrod" and the soundtrack for my film "Golgotha, AR". Also, loads of extra goodies in the way of silly short films, hilarious shots of kids scared shitless of old St. Nick, Wayne Newton singing "Jingle Bell Hustle", and bouncy boobs."

Watch the first 5 minutes below and click in the video to see the full episode:

The Schlocky Horror Picture Show airs in Australia and New Zealand and is hosted by Nigel Honeybone. The show started in 2007 and airs on community television.

Here are the hosting segments from the first episode in which Nigel showed the movie Last Man on Earth:

Moona Lisa was the host of a few differently named shows in the San Diego, California area. She was on the air from 1963 to 1973 on shows called Science Fiction Theatre, Fright Night, Moona Lisa's Creature Features, and Moona's Midnight Madness.

Watch a clip from one of her shows here: