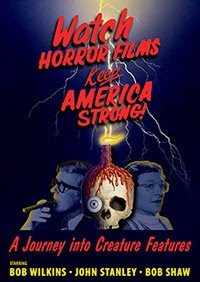 Watch Horror Films, Keep America Strong is a documentary about California's horror host show Creature Features. Originally hosted by Bob Wilkins and then John Stanley, Creature Features has a long history in the entertainment and the television world. All of this is presented in the film, along with old clips from the show and all new interviews.

It is currently being screened in select theaters and will eventually make it's way to DVD. To find out more information on the film and where it is being screened, go to their website at: Watch Horror Films, Keep America Strong

Here is a trailer for the documentary: