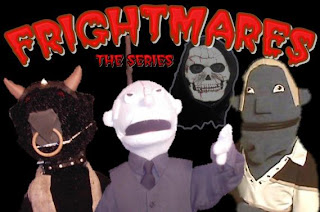 Frightmares the Series is an internet based horror host series that started in September of 2003. All the characters in the show are puppets, including the hosts The Frightmaster and Kane, who introduce a wide variety of movies and old T.V. shows. The Boss is heard but never seen and was the one who sent Kane to make sure The Frightmaster makes the show the way he wants.

Here is Episode 202 of Frightmares the Series which features two episodes of One Step Beyond: