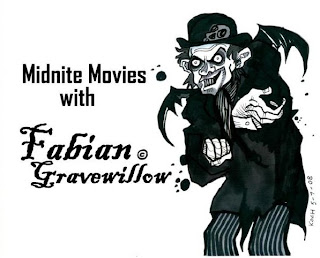 The Fabian Gravewillow Show is a new horror host show that is in production and will be premiering soon. 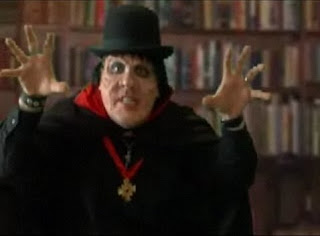 Here is the sysnopsis from their MySpace page:
On a thunderous planet somewhere deep in the galaxy, Queen Promedia has been a ruler of her people for a VERY long time. Because of this, she doesn't have to do much of anything except see that the citizens are satisfied (get yer head outta the toilet!). After a transmission featuring their favorite horror film star, Fabian G Gravewillow, is blacked out due to cancellation by both the network and the star(he died-what a drag), it is up to the Queen and her servant Dufus to resurrect him on planet Earth and find him filming headquarters in Hollywood's hills. Unfortunately, they pick a house that belongs to a troupe of kiddie puppets who had a hit show of their own in the 1960's. Not so groovy. Along with his sidekick Earl, Fabian tries to make do with the crazy and usually terrible movies he is given.

Watch a preview of the show here: