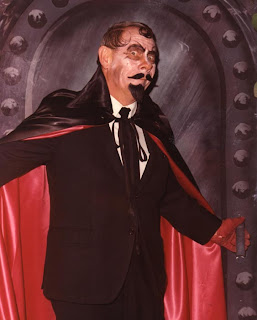 Detroit, Michigan based Sir Graves Ghastly hosted a show called Sir Graves Big Show from the 1967 though to the 1980s. During it's run, the name was changed to just Sir Graves Ghastly. The show, which also aired in Cleveland, Ohio and Washington, D.C., featured characters including The Blob, Baruba, and Reel McCoy.

Watch the host segments from an 1980 edition of Sir Graves Ghastly here:

Laugh along with Sir Graves at: http://www.sirgravesghastly.com
Sir Graves Ghastly