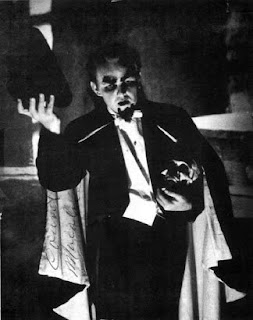 Count Macabre was a horror host on WBRZ-TV, Channel 2 in Baton Rouge, Louisiana in the 1960s. Alongside a skull named Erik, he hosted movies on a self titled show and later had a talk show entitled The Wednesday Show. 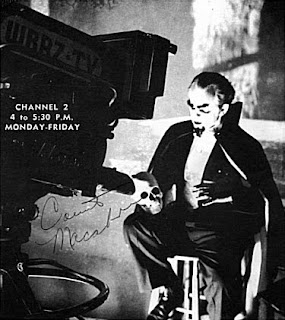 During his time on TV, a band called Connoissurs made a 45 RPM record called Count Macabre in tribute to him.

Listen to the song below, or right click here to download:Count Macabre

Anonymous said…
What a surprise running into this song.

The vocalist is Frankie Radosta, a Baton Rouge native. He was 20 years old when the song was recorded at the TV studio.I had the pleasure to be there with him.

I was working with Frankie in a band called The DynaTones at the time that he recorded "Count Macabre" around 1963.

He went on to form a great band called Buffalo in the late 60's.

Frankie died in a speed boat racing accident in 1974 on False River.

I miss my friend still and had not heard his voice since 1973 until today.

Anonymous said…
Yeah, Count Macabre was big locally back then. I used to watch him every day. Even dressed as him one Halloween when I was about ten. Used to have one of those autographed pictures that I got at a personal appearance he did at a shopping center or something like that.

GLM said…
I knew Frankie well, I played trumpet in Buffalo band. I also played on the Count Macabre Show with a band named "The Burgundy Brass, we played Tijuana Brass music. We performed on his TV show numerous times. I was playing with Buffalo when Frankie died. Glenn L. Moreau email- glenn.moreau@gmail.com
January 27, 2013 at 12:37 AM

Unknown said…
I would like to know who all was in The Playgue They also performed on Ct. Mc. Show . GREAT...