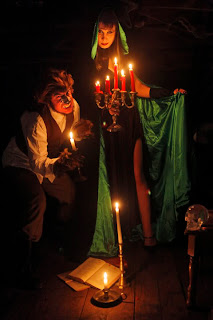 Sinister Elixir is the title of the first episode of season seven of Shilling Shockers. In it, Penny Dreadful returns to her attic lair after a season of communing with spirits in the dark forests of New England. As her hair turns gray and wrinkles form upon her brow, the 700 year-old witch admits that she must drink a dark elixir once per year in order to retain her youth. Unfortunately, Penny discovers that her magic elixir has been stolen, and she must begin a race against time to recreate the concoction. In addition, Penny presents the movie The Ghoul.

Watch a preview of it here: