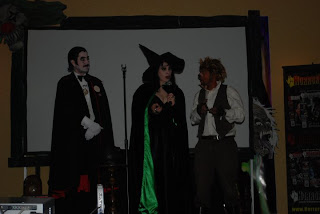 The Vampira Tribute was held on March 28, 2010 during the HorrorHound Weekend in Indianapolis, Indiana. All the hosts in attendance paid their respects to Vampira and to other hosts who have passed away. Dr. Shocker hosted the event which included remembrances by Penny Dreadful, Garou, Count Gore De Vol, Dr. Shocker, Ms. Monster, Doktor Goulfinger, Joe Bob Briggs, and The Bone Jangler.

The entire tribute, along with interviews with the hosts, was filmed for a DVD that will come out in the fall of 2010.