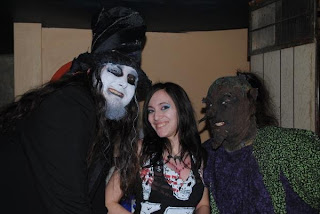 Marlena Midnite and Robyn Graves, from Midnite Mausoleum, were just a couple of the horror hosts that came together to honor Sammy Terry at the Crump Theater in Columbus, Indiana during the Paranormal Scare Fest on February 20, 2010. Also participating in the tribute were Gunga Jim, Dr. Sigmund Zoid, Tony the Teenage Werewolf, and Dr. Calimari, Baron Mardi, Reverand Polypus, and Woody the Clown, from Atomic Age Cinema.

See some of the event from Midnite Mausoleum's point of view here: