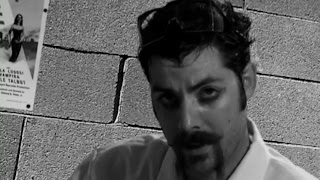 Josh Roush is a filmmaker and horror host fan who sites Ghoulardi as one of his influences. Inspired by his love of the genre, he created a short film with his own host, Dr. Mosavian, which is his tribute to and spoof of host shows.

This is the backstory of Shock Theater With Your Host Dr. Mosavian:

For over a year, horror host extraordinaire Mosavian treated young and old alike with terrible movies and witty banter with the help of his sidekick Edgar from within an undisclosed jail located deep in the heart of Cincinnati.

Mosavian was sentenced there by Judge Fant in what was widely considered as the judge trying to garner popularity for his nephews crappy television show on the network that the he was partial owner of.

Unfortunately, after too much back talking and turning his loyal viewership against the system, they issued Mosavian a security guard to keep him in line and not harass the Fant family.

Josh said…
I should mention that everytime Mosavian encountered the tazer in this movie... my good friend actually got tazered.