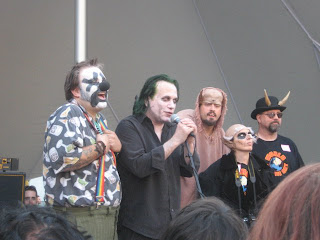 October 10, 2010 was World Zombie Day 2010, where groups of people in different cities got together dressed as zombies. The event was started a few years ago by Professor Emcee Square from The It's Alive Show. The city with the turnout is usually It's Alive's hometown oh Pittsburgh, Pennsylvania. Professor Emcee Square, Pointy, Helga, Stiffy the Dead Clown, Leah, and Fritz were joined by more than 5,000 zombies and the event, breaking the Guinness World Record from previous years. As part of the festivities, the cast joined in a wedding, contests, and a concert, which included the Professor's band, Deathmobile.

Watch some video of the events below:


Nosh on some brains at: theitsaliveshow.com
Professor Emcee Square The It's Alive Show