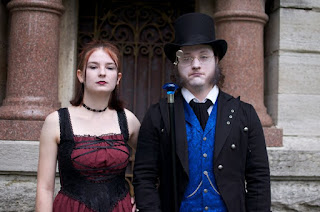 Baron Von Porkchop's Terrifying Tales of the Macabre debuted on DATV channel 5 in Dayton, Ohio on January 8, 2011. The show stars Baron Von Porkchop and his wife, the Baroness. They are joined by the Baron's assistant, Bean, and Sleazy Tom.

See the Baron and Baroness' promo for HorrorHound Weekend here: