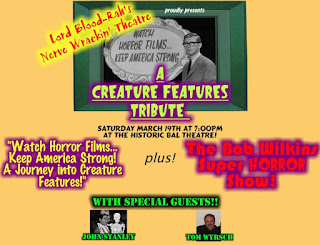 On March 19, 2011, Lord Blood-Rah hosted his Lord Blood-Rah's Nerve Wrackin' Theatre at the Historic Bal Theatre in San Leandro, California, and this time, instead of hosting a pair of horror movies, he presented a tribute to Creature Features. He was joined on stage by John Stanley and Tom Wyrsch, who discussed both Bob Wilkins and John's time on the show. They also screened the documentary Watch Horror Films, Keep America Strong! and The Bob Wilkins Super Horror Show.

Watch highlights of the event here: