The Frank and Drac Show 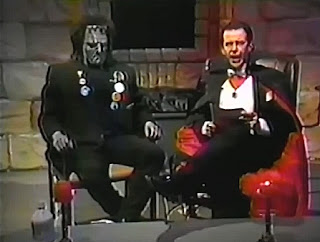 The Frank and Drac Show aired on WOIO-TV Channel 19 in Cleveland, Ohio from October 1987 to June 1988. The show was hosted by Frank and Drac who were joined by Bambi, Boom-Boom, and Thumper, who were known as The Vampettes.

Watch a clip from a holiday edition of the show here:

Spuddy98 said…
Wish the clip was still there. The vampette bam bam (I think) was my dear friend Chloe Hopson of the passport project. Wonder if she fesses up to it with her students today. She said she had great fun there.
January 29, 2014 at 8:17 PM

PawpawFixIt said…
I was the burglar in their holiday show. I was friends with Bob Tokai. I knew him from a movie production I worked on in Akron, Ohio in the spring and summer of 87. The spider they had on their table was a gift from me that Christmas. Bob was a very kind and generous friend. I played that part as a favor for a friend and didn't expect anything ink return. He bought my family tickets to the Barnum and Bailey circus that was in town that year. I'll never forget those days great fun to work with them.
November 20, 2016 at 6:56 PM