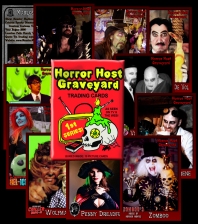 All cards have a picture of the host on the front with another picture and facts about the host's show on the reverse side.
Random sets may include one of the cards autographed by a host.
Full sets of 10 cards are $10.00 per set, including shipping, and can be ordered by clicking the PayPal button below: 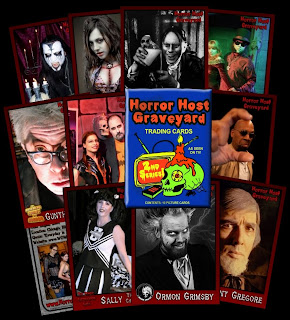 The full set of Horror Host Graveyard Trading Cards Series 2 are available for $10.00, including shipping.

This series, like the first, contains ten cards with pictures of the hosts on the front and back, along with information about the host. Random sets may include one of the cards autographed by a host.

The featured hosts are:
The Bone Jangler and Nocturna from The Bone Jangler
Count Gregore from Nightmare Theater
Dr. Sarcofiguy from Spooky Movie Television
Gunther Dedmund from The Basement Sublet of Horror
Marlena Midnite from Midnite Mausoleum
Ormon Grimsby from Monster Creature Feature
Sally the Zombie Cheerleader from The Zombie Cheerleader Show
The Sinister Minister from The Midnight Massacre Theatre
Undead Johnny and Romy from The World of the Weird Monster Show
Zacherley from Shock Theater and Chiller Theatre

To order your own set, click the PayPal button below: